Some of our cultural highlights: 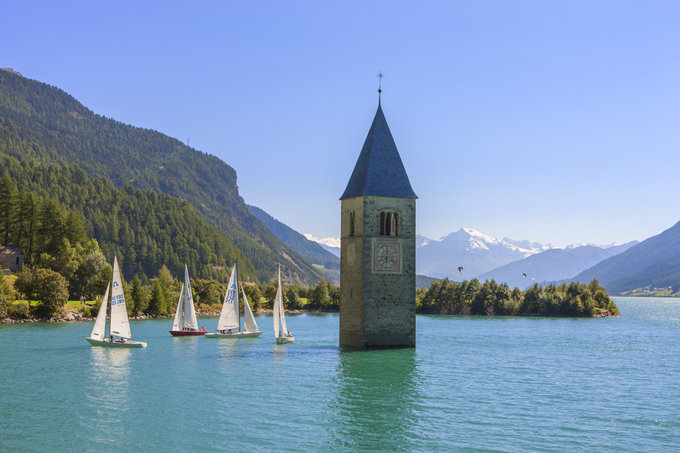 The Stelvio National Park is over 134,000 acres and is one of the biggest nature resorts in Europe covering the entire Ortler-Cevedale area. Resia Lake, known for the church tower rising from the lake, is the symbol of the Val Venosta holiday region. The former three lakes - Muta Lake, Resia Lake and Curon Lake - and the entire surroundings were flooded to create the artificial Resia Lake. People had to move because the entire village of Curon was also flooded, and the church tower sticking out of the lake reminds of the former village centre.

Glorenza was an important traffic junction during Roman times: the Via Claudia Augusta road and a trade road to the nearby Switzerland passed through the village. Glorenza became a trading platform for salt, tropical fruits, iron products and herbs. Today the medieval town Glorenza is the smallest city on the southern side of the Alps.

During Roman times, the Via Claudia Augusta was an important trade road to North Tyrol (Austria) and Switzerland. Today, the road is used as a cycling trail from Resia to Merano.

The panoramic Stelvio Pass road is the highest pass road in Italy, the second-highest in Europe, and one of the most impressive roads worldwide.

The construction process for this road, which began in 1818, was a pioneering achievement. The road was opened in 1825 and extended for automobile traffic in 1900.

Stairway to Heaven: The alpine Romanesque road is a cultural hike along the unique historic references of the Early and High Romanesque period. 20 sights can be admired in Val Venosta.

You can see the Marienberg Convent in Burgusio from afar. The convent is located at 1,340 m of altitude and hence the highest Benedictine abbey in Europe. It was founded during the 12th century.

Lasa marble, also called the white gold from Val Venosta, is a precious metamorphic limestone. The rock is known all over the world: recently, the new train station at Ground Zero in New York is realised with Lasa marble.

Churburg Castle is one of the most imposing renaissance castles in the Alps. The castle is best known as the holder and guardian of the largest private collection of armours and arms.

Messner Mountain Museums: Extreme mountaineer Reinhold Messner has made his dream come true with a 5-part museum project. Two of his museums are located in Val Venosta.

Because Val Venosta doesn't have much rain, the farmers had to realise irrigation channels to transfer the melting water of the glaciers to irrigate the fields. Numerous irrigation channels were developed. Used as water channels in the past, they are now ideal trails to enjoy wonderful hikes along the channels!

The 12 acres of Gardens of Trauttmansdorff Castle in Merano are fully accessible. Due to the mild mediterranean climate of Merano, it is possible to admire botany from around the world in Trauttmansdorff. The visitors can also expect fascinating mediterranean vistas of the imposing mountain ranges of the Texel Group and the city of Merano.

Citytrip Meran - The small town of Merano is just 50km south of the camping and is reachable with the Vinschgerbahn for free. Meran's main shopping street, the Laubengasse is the pulse of the city which keeps tradition alive with many family-run shops. The offer ranges from Italian shoes and bags to handmade hats. Every Friday there is a big market in Merano for even more shopping opportunities.

With all the anticipation, we always keep the safety, protection and well-being of our guests and employees in mind.

To help you plan your well-deserved holiday, we have taken comprehensive precautions for you and your protection.

Your family Wunderer
Find out more